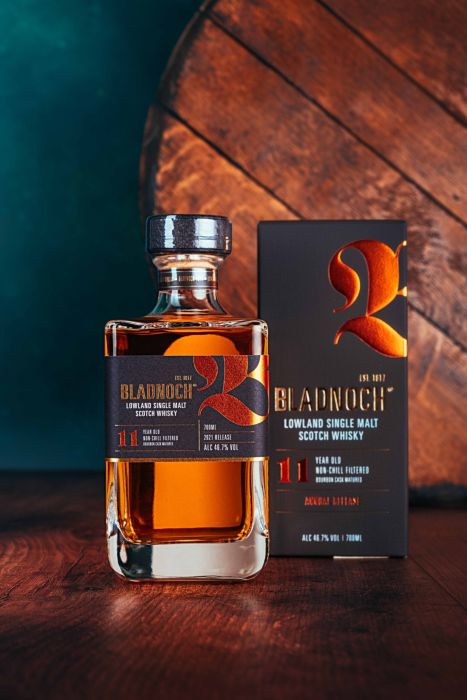 Skip to the beginning of the images gallery
Details
The 2021 release of Bladnoch 11 Year Old single malt has been matured exclusively in ex-bourbon casks. Aromas of honeydew melon, buttery pastries, lemongrass and pine needles fill the nose, complemented by notes of vanilla ice cream, caramel sauce, grass, cinnamon, honeycomb and nutmeg throughout the palate.
70cl
ABV 46.7%
Tasting Notes for Bladnoch 11 Year Old 2021 Release
Colour - Lemon Gold
Nose - Delicate floral with notes of honey, refreshing citrus and cut grass
Palate - Floral Parma Violets with fresh cut apples and hints of wood spice
Finish - Sweet mouth coating leading to a refreshing finish
Distillery Profile
Bladnoch’s rich history dates back to 1817, when John and Thomas McClelland were first granted a licence to distil Whisky on their Bladnoch farm in Scotland’s Lowlands. For nearly a century, successive generations of McClelland family grew and modernised the distillery. At its peak, the site had six washbacks and annual production of approximately 230,000 litres of alcohol, which cemented its status as the “Queen of the Lowlands”. Over the next 80 years, Bladnoch Distillery changed hands several times and continued to produce fine Lowlands Whisky. In 1956, Bladnoch Distillery Limited was created and the stills which had fallen silent during the war were recommissioned. The stillhouse was expanded to four stills in 1966. More recently, the distillery was owned by Arthur Bell & Sons (which would later become part of Guinness / United Distillers) between 1983 and 1993, a period during which the brand’s distribution was increased and a Visitor Centre was established. From 1993, the distillery was privately owned by Raymond and Colin Armstrong. Australian entrepreneur, David Prior acquired the company from Raymond and Colin Armstrong, and began an extensive refurbishment of the distillery.
Why Choose Whisky International Online
We found other products you might like!