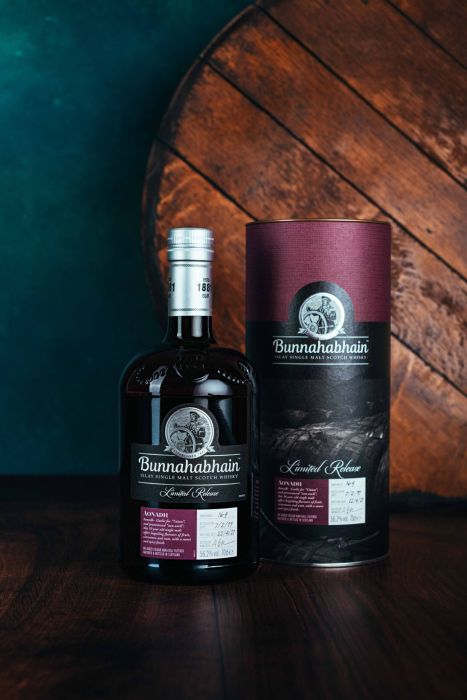 Skip to the beginning of the images gallery
Details
The Bunnahabhain Aonadh Limited Edition is pronounced 'Oon-ouch', this 10 year old Limited Edition Single Malt is a perfect marriage of the finest port finished and sherry matured Bunnahabhain.
Distilled and filled into cask on 7th February 2011, this release is a marriage of port finished Bunnahabhain and malt fully matured in sherry casks which were brought together post maturation
The result is a unique spirit alive with creamy vanilla, caramel, oak, nuts, fruit and cinammon spice with a subtle salty note.
70cl
ABV 56.2%
Tasting Notes for Bunnahabhain Aonadh Limited Edition
Colour - Deep Auburn
Nose - Rich creamy vanilla with notes of brandy butter, caramel, indulgent berries and a subtle hint of oak.
Palate - Sweet red and black fruits are complimented with a cinnamon spice, roasted nuts and a slight saltiness coming through at the back.
Finish - Long finish with a fading spice reminiscent of chilli chocolate and hints of floral candy.
Distillery Profile
Situated at the end of a small single track road, on the shores of the Sound of Islay, Bunnahabhain is known for its spectacular surroundings and delicious signature unpeated Islay Single Malt Whisky. First founded in 1881, Bunnahabhain relied upon the sea trade. Armed only with a small village, a pier and lots of whisky making know-how, our forefathers received supplies by boat and sent adventuring seafarers back to the mainland with casks full of whisky. After a short closure in the 1930s, Bunnahabhain saw one of the biggest changes in its history in 1960, when a new road was built to the distillery. Supplies could now reach us much easier by land – albeit, a hilly and challenging drive. As word of Bunnahabhain spread and demand soared, a second pair of stills were installed in 1963 to increase the production capacity. In 1979, our classic 12 year old Single Malt Scotch Whisky was introduced to the world, received to great acclaim. 1993 marked a historic moment in Bunnahabhain’s history as the last boat docked as the road was deemed the most suitable route for receiving ever increasing ingredients and supplies. In 2006, 3 years after being purchased by Burn Stewart Distillers, a major rebrand was launched, with a redesign of the 12 year old packaging, and the launch of 18 year old and 25 year old variants.
Why Choose Whisky International Online