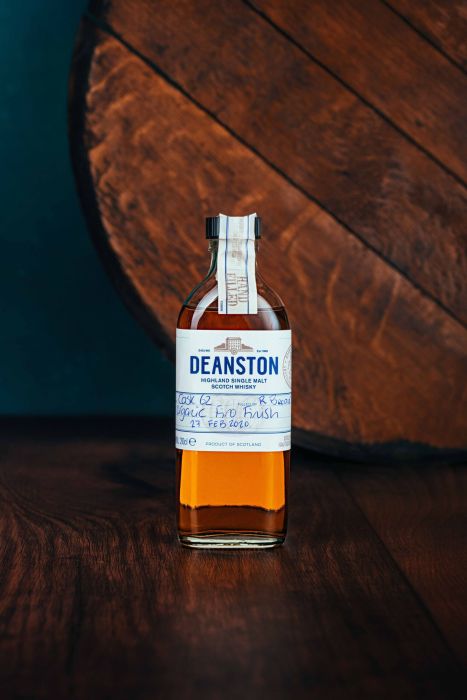 Skip to the beginning of the images gallery
Details
The Deanston Warehouse 4: 2001 Organic Fino Finish 55.3% 20cl was distilled in December 2001 during our week of Organic whisky production, this was originally matured in re-charred American white oak casks.  In 2016, we transferred the spirit to an Organic Fino hogshead from Bodegas Robles.
Robles is the leading Sherry producer when it comes to organic viticulture. They don’t only have 100% organic production, but are the first Spanish winery to calculate their carbon footprint and commit to reducing their environmental impact every year. A perfect match for us at Deanston!
A really intriguing Deanston whisky is the result of the years maturating in the fino cask. A beautiful copper colour when poured.  Sticky toffee pudding on the nose, sweet. In the mouth herbaceous, fennel seeds? and roasted nuts. A finish of salted caramel and spice.
20cl
ABV 55.3%
Tasting Notes for Deanston Warehouse 4: 2001 Organic Fino Finish 55.3% 20cl
Distillery Profile
Our home is far from the quaint Highland distilleries that may come to mind when you think about whisky in Scotland. Formerly a bustling cotton mill that in its heyday employed 1500 people, the building and community of Deanston were facing uncertainty when it closed for good in 1965… enter our founder; Brodie Hepburn.
Our founder, Brodie Hepburn, is far from your average founder. A true pioneer, he saw huge potential in the battered old cotton mill, where others only saw challenges. He saw potential in the river Teith, with water soft enough for whisky, and the strength to power a community. He saw the people of Deanston town, with the passion and honest work ethic to become true whisky makers. Hepburn’s took a risk and it paid off. The old cotton mill was transformed into a place perfect for whisky making.
We source only the finest Scottish Barley, close in proximity to our distillery, in partnership with local farmers. It’s not the norm to only use Scottish barley, but it’s important to us. We use traditional, hands-on methods and fermentation that takes far longer, because it’s the right thing to do, transforming the grain into the waxy, soft, smooth highland single malt we’re known for.
Why Choose Whisky International Online