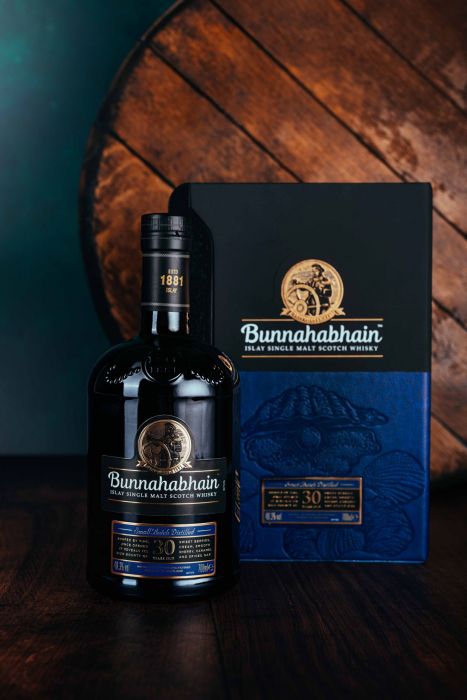 Skip to the beginning of the images gallery
Details
The newest member of the Bunnahabhain family, this first batch release of 30 year old whisky is one of our oldest single malts.  Matured exclusively in ex sherry casks in our coastal warehouses at the distillery, this is a rich and sweet dram.
Each drop of our newest member of the Bunnahabhain family takes patience and perseverance to perfect; three decades of watching and waiting, a unique character shaped by the salt-rich air at Bunnahabhain Bay.
Every dram of our 30 year old is matured in ex-sherry casks under the watchful eye of our Distillery Manager.  Only when it is fully formed is it freed from its coastal cocoon; its once-hidden bounty ready to be revealed and revered.  Expect notes of strawberries and cream, gradually developing into honey nut cereals and an abundance of rich toffee before finishing with a hint of salted caramel and light spices.  As the first batch produced for this new release, this is definitely not one to miss!
70cl
ABV 46.3%
Tasting Notes for Bunnahabhain 30 Year Old 2020 Release 46.3%

PALATE - Strawberries and cream dominate the palate, gradually developing into honey nut cereals and an abundance of rich toffee.

FINISH - A gentle aftertaste of stewed berries and ginger, with a prolonged and undulating combination of spiced oak and salted caramel.

Distillery Profile
Situated at the end of a small single track road, on the shores of the Sound of Islay, Bunnahabhain is known for its spectacular surroundings and delicious signature unpeated Islay Single Malt Whisky. First founded in 1881, Bunnahabhain relied upon the sea trade. Armed only with a small village, a pier and lots of whisky making know-how, our forefathers received supplies by boat and sent adventuring seafarers back to the mainland with casks full of whisky. After a short closure in the 1930s, Bunnahabhain saw one of the biggest changes in its history in 1960, when a new road was built to the distillery. Supplies could now reach us much easier by land – albeit, a hilly and challenging drive. As word of Bunnahabhain spread and demand soared, a second pair of stills were installed in 1963 to increase the production capacity. In 1979, our classic 12 year old Single Malt Scotch Whisky was introduced to the world, received to great acclaim. 1993 marked a historic moment in Bunnahabhain’s history as the last boat docked as the road was deemed the most suitable route for receiving ever increasing ingredients and supplies. In 2006, 3 years after being purchased by Burn Stewart Distillers, a major rebrand was launched, with a redesign of the 12 year old packaging, and the launch of 18 year old and 25 year old variants.
Why Choose Whisky International Online